Watch the interview below:

Listen to the interview below:

Mark travels around the world as a motivational speaker. He is one of the most inspirational people at the moment, a mentor and coach to other amputees, and an ambassador for a number of business and organizations. In addition, he is also the award-winning author of the book “Man Down” and an employee and ambassador of the Royal Marines Association.

Mark joined the Royal Marines right after school with just seventeen years old and successfully finished his commando training within a year. He traveled the world as a Royal Marine and operated in different countries such as Iraq, Norway, and the USA. When he became a father, he decided to serve five more years and then leave the Marines to start a new career and be around his family. Throughout these years, he separated from his daughter’s mother and left the Royal Marine, to train as a bodyguard in South Africa.

Unfortunately, this didn’t work out. In 2007, he decided to go back to the Marines. Immediately, he was deployed to Afghanistan. 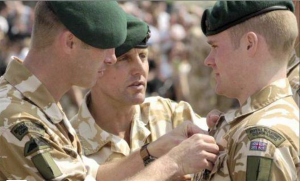 After four months of service, during a simple an ordinary duty routine tour around the camp, he ran into a landmine which blew both of his legs above his knees and his right arm above his elbow.

“I thought we had come under attack so my initial instinct was to neutralize the attack and ensure my team was ok…then, I look down to where my legs should have been and noticed what had happened.”

Mark considers himself lucky because he can remember everything about the accident which has helped him to recover psychologically faster and avoid traumas. Although he was in shock for some seconds, his head was always clear and aware of everything that was happening. He confessed that in the beginning, he was not in pain, he only felt discomfort. For him, the pain started when his teammates started to stabilize and transport him. He was evacuated back to the UK right away.

Triple-Amputee: Between Guilt and Chaos.

Mark’s initial emotion was anger which he felt was related to guilt. He felt guilty because he had put his team and all the professionals around him, in danger. At that moment he did not care about himself, but he felt a sense of disappointment for letting people around him, down. Although he was highly trained as a Royal Marine Commando, he could not avoid the landmine. He also thought about his three-year-old daughter and how ashamed she would feel to have his father in a wheelchair.

But outside this resentment, he never thought he was going to die. He admits living within a turmoil of emotions. Calm and relax were his outer emotions but chaos, guilt, and anger were residing inside. But despite that, he always knew he was going to get out.

Mark Ormrod confirmed that remaining centered and relaxed in circumstances like that are part of his natural instinct. In his opinion, nobody can be trained for that. He remembers how, in the middle of the chaos, he was handling one thing at a time. After the accident, he managed not to get overwhelmed about everything that was happening.

It took him three days to overcome his coma status, four days to leave the intensive care, and five weeks to be discharged from the high dependency ward. After that, he was transferred to the rehabilitation center. According to Mark, people around him were the real motivation to stay positive and advance through the road of recovery.

Well here we are, today marks 10yrs to the day since I was blown up and injured in Afghanistan resulting in me becoming the UK’s first triple amputee from the conflict and what a crazy 10yrs it’s been!!! •

After the accident, Mark knew that there were only two ways to go:

He admitted that when he became conscious of his reality and woke up, he was totally cool about it.

“no legs, one arm, what do we do from here? There is nothing I could do about it. I am not gonna go back, I’m only twenty-four, so I need to figure out a plan where I can live the rest of my 78 years and be happy”

Mark had no clue about the amputee lifestyle, so he started to research. He spent a lot of time in the hospital googling and looking for people that had similar injuries and were doing remarkable things around the world.

At that point, what really helped him was being a Royal Marine. He had so much pride on his job that he would push himself as hard as he could to ensure the Marines would be proud of him. Mark was still a Royal Marine and did not want to be an embarrassment for them. So he wanted to represent them at the highest level.

“My highest motivation was not letting the Royal Marines down”.

Mark Ormrod confessed that the voice of self-sabotage came a lot throughout his rehabilitation process. So whenever that happened, he would go on the Internet and watch videos about someone with the same injuries who was doing the same things he wanted to do. Mark was made aware that he wasn’t alone in this situation and saw there were other people getting on with their life and living it the same way he dreamt.

He found Cameron Clapp (An American athlete and triple amputee) online. By then, he knew that all he needed was to figure out Cameron’s mindset. He was so sure that if he learned whatever he was doing, physically and emotionally; then he would also be able to do the same.

Although he struggled a bit at the beginning, in June 2009 he went to meet Cameron and train with him. According to Mark, this event changed his life. With his experience and testimony, Mark reminds us about the importance of modeling someone for our development and the impact that some people can experience through mentorship.

Mark admitted that he was already somehow resilient by nature. He learned to be resilient during his marine training. But the most powerful tool that helped him get through was the power of gratitude.

He considered the Tony Robbins’ event useful because it helped him meet cool people and build upon what he already had. He could reshape his mindset and entire approach to life. Today, his daily focus is on being grateful for all he has and he just concentrates in all the good things.

Mark listens to an eight-minute voice note on his phone called “the hour of power”. It consists basically of affirmations about his life that reminds him who he really is and things that he is grateful for. When things get chaotic and difficult around his job, family, or injuries; the “hour of power” helps him get around and stay focus.

Mark Ormrod acknowledged that having a few broken fingers in his only surviving limb is not easy. He has to cancel a lot of meeting and slow down.

But having these types of struggles has taught him to look at things from a different perspective. Instead of getting caught in the drama and negativity, he sees the positive aspects of it. He can be more time with his kids and catch up with all the stuff he had accumulated or left behind. He is using this time to read some books and relax a bit more. While he allows his body to heal he is using this precious time to figure up the next step.

Didn’t take long for the kids to start graffitiing my splint 😂😂😂 pic.twitter.com/Qa5iA61WbK

Mark’s mindset when struggle takes over is very clear.  Although some things in life suck, he knows that he needs to make the most out of it.

“it’s not easy, it takes time and it takes consistency, but you need to look at your life holistically”

According to Mark, the first thing people can do is to change their morning routine. The typical cycle for a person is to snooze the phone and immediately switch on the news. With this habit, a person is subconsciously absorbing all the negative vibes that comes with it.

People are also caught in the office Monday-Friday work week so when Sunday comes they get depressed because they live for the five-day cycle and those downbeat feelings repeat again and again daily.

Mark recommends that having a good morning routine helps to change your whole mood. He acknowledges that “social media can be both bad and good.” In his opinion, if you don’t know how to use social media positively, it can affect your mindset.  Constantly comparing yourself with other people and how they have achieved their goals can bring you down easily. Mostly because the process, all the hard work behind a successful picture, is not shown in the news feed.

He tries to limit himself to social media and uses his networks to get positive stuff. He recommends joining groups with positive messages.

When Mark Ormrod started rehabilitation, his biggest goal was to be free from a wheelchair. In 2016 while planning his goals for 2017, he noticed about his ten-years anniversary from being injured and realized that he hadn’t done any sports in the last ten years.

He aimed for the Invictus Games which is the Paralympics for men and women from the military around the world. He picked the sports he thought were suitable for his skill set.

Mark confessed that in his first year he got snapped and realized he needed to take the games and the athletes a bit more seriously. He became aware of his need to train and learn technically and psychologically about these sports. So, he researched techniques and strategies with a plan rather than just to play.

For Mark, the times that he has been the happiest is when he makes progress by overcoming challenges. He knows he was going to feel very uncomfortable and unconfident preparing for the games. He was working full time for the Marines, so his training for the games was challenging. On the weekends he would travel all over the country to attend specific training camps. He focused on full-time training Friday, Saturday and Sunday, then, go back to work on Monday.

“Everyone has different reasons for doing the games, for me it was about medals…it was about beating myself, not other people.”

Nowadays his journey as an athlete is over. He has decided not to join the games anymore because of its limited capacity. On his personal level, he considers he has achieved everything he needed to achieve.

Mark does not push himself so much on his physical training anymore. He is more interested in keeping himself healthy, fit, and mobile. For that, he looks at his lifestyle holistically. He usually stretches, eats well, and rests properly every night. For him, a good amount of sleep is key. According to Mark, anyone can start changing what they eat. He recommends starting at the bottom: “get a good amount of sleep and …then go to the gym”.

If you love this episode, please leave a review

Leave a review on iTunes