How To Become An Amazing Copywriter, with Nick Usborne. | Yuli Azarch

How To Become An Amazing Copywriter, with Nick Usborne.

Yuli Azarch | April 26, 2019 | No Comments on How To Become An Amazing Copywriter, with Nick Usborne.

Nick Usborne has been a copywriter since 1979.

He has a copywriting portfolio in companies such as Citibank, Apple, Chrysler, NY Times, Disney, The US Navy, and more. He also has more than 15 copywriting awards. Today, he has online copywriting courses. He trains business owners, coaches, and consultants, to be better copywriters. 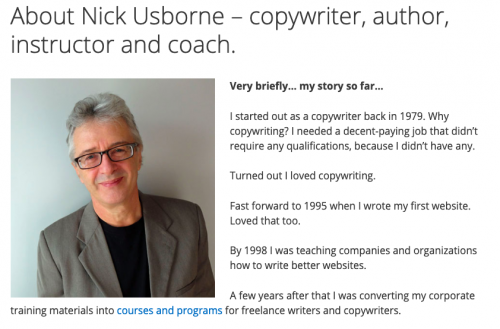 “My dad suggested me to get off the sofa, go out to London and get a proper job and come back when I had a job. I ended up sleeping on the floor in a shed house in north London with about 5 other people sharing the house.”

Nick started out as a copywriter in 1979 when there was no Internet. He needed a job that didn’t require any experience or qualifications, so he got in copywriting by accident. At that time he didn’t have a resume. He immediately fell in love with copywriting.

From that moment he knew that this was his passion. It was a moment of self-discovery. Nick knew about being a copywriter a few days before entering the creative department. He knew that he was one of the creative people and not one of the management people.

“The only thing that I did there and always in my life is increasing the surface area for the opportunity to get lucky.”

Throughout his entire career, everything that has worked out for him is being where he saw an opportunity and saying yes to that. According to Nick, it is often very scary, but it is amazing to just say yes. A lot of success is done through certain luck, but you can improve the surface area of the likelihood of getting lucky.

Fast forward to 1998, when he was teaching copywriting to companies and big organizations. Today, he prepares material such as courses and programs for online content copywriters and freelancers.

Nick was the 2014 copywriter of the year. 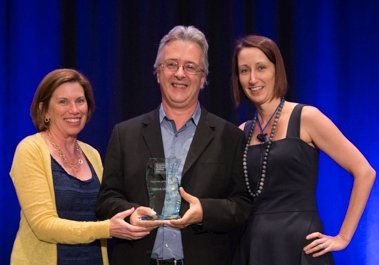 “There is no business in this planet that can’t survive without the copywriting. Without words, you can’t sell.”

According to Nick, Copywriting is words that are put together to be persuasive.

To persuade a change in viewpoint and opinion about something (for example, a brand). The ads are designed to make you think about them. To shift perceptions.

People sign up for stuff, they are put into an automated funnel, and they get a relentless barrage of emails every single day. According to Nick, the trouble is that the more funnels are that created, the more marketers are beginning to sound the same.

“I am a huge advocate with conversational copywriting. Which is stepping back and recognizing that the most persuasive voice is not sounding like a direct marketer, but being a really persuasive version of ourselves”.

According to Nick, kids know how to persuade. They know how to do it with conversation, they understand something fundamental to selling, which is to touch people emotionally.

Conversational copywriting is the cure for corporate nonsense. It is not a soft approach, but it is a better approach.

According to NeuroMarketing, when someone is trying to sell us something too hard, you can actually feel a chemical change in your body. You feel stress and you want to get away from the situation. If you have a normal conversation with friends, the amygdala goes to sleep and the pre-frontal cortex lights up. This is where we make a decision, where we process emotions, relationship with others, deeper thinking.

So according to the scientific proof, it is important to stop pushing, because that stimulates the fight-or-flight. Instead, start engaging people with a conversational approach, which builds trust and is disarming.

“Conversational copywriting is everyday language. It is not this non-sense business language, is not the pretend urgency, like “offer expires by midnight tonight.”” 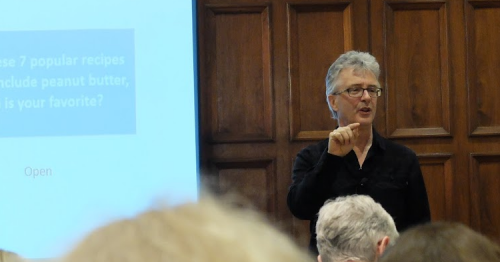 Nick uses real and genuine urgency, to get people off the fence, no to sell them. According to Nick, he still uses urgency but if he has a deadline He tries to make it a real deadline.

Being authentic and transparent with the audience whether they are buyers or not. Nick says that people recognize him as authentic. He is not writing to them as if he is authentic.

“I know I could make more money with a harsh manipulative approach in the short term. But if I want to build a long term relationship with my audience and my customers. If I want them to respect me and buy from me in the long term. I can win in the short term by being a hard-charging direct marketer but I am going to win in the long term by being a conversational copywriter and marketer and earning the trust and respect of my audience and customers.”

According to Nick, Conversational Copywriting is an approach that can work for anyone. If you are actually going to meet a client and interact with that person, then you have to start building trust. The conversational approach is essential here if you plan on working one-on-one with clients.

One of the things about the conversation is that you are never going to have a conversation if you don’t listen. It is our greatest weakness, that we talk too much and listen too little. We don’t listen carefully enough what the other person is trying to say. Nick says that it is the same with copywriting and listening. The first job is to learn how to listen.

According to Nick, the web is a fantastic place for listening. If you want to sell something, just go to a bunch of social media or profiles of the competitors, who are trying to sell you the same thing. Then just listen to what the people are saying, in the comment strings. Or if it is a product, go to Amazon and read the reviews.

The idea is to listen to the voices of the audience whether is social media, review sites, etc. Look for the emotional triggers in these places. What is something that they really want in this product or service? What upsets them about the current choices and what delights them?

One of my most popular podcast interviews to date… Nick Usborne Will Teach You Conversational Copywriting | @OfThePractice https://t.co/8IU4GIRZV2 #copywriting #conversationalcopywriting pic.twitter.com/H3GL8AHEs2

“The most simple way to become a copywriter, without any training, is one, listen and two, mirror back what your audience is saying.”

According to Nick, mirroring language is disarming, it is engaging, it builds trust. As a conversational copywriter you need to let go the ego and vanity, and stop trying to be clever. And, most importantly use the language of my audience.

Thanks a lot, Nick!

To find more about Nick go to https://conversationalcopywriting.com,

You can also send him a message to [email protected].